Well, mostly. Got everything cast and built. A friend of mine (Graeme) came over and helped with the painting this evening and we got everything done. There are details I want to work on, such as painting colours on the pillars but it's gameable. Unfortunately my daughter appears to have hidden the camera so no pictures! However there will be games played on it this weekend and Graeme took some shots on his phone so I'll supply plenty next week.

Yay! A finished project! Well pretty much, I doubt a project is ever truly finished. I think doing this in a month was pretty good. I'll give details of painting etc later too but it's now after 1am and I'm tired.

Night!
Posted by Dewbakuk at 17:04 No comments:

Thankfully my lovely wife Kt (Katie) stepped in and glued lots of tiles for me today. She was gluing them down almost as quickly as I was casting them which was a huge help. Only need to cast about 4 more floor sets and I believe everything will be cast. Then just have to finish assembly and paint it..........

The thin mixes I did are almost all too soft. It's too late to do anything about it now so I'm hoping that with a layer of paint and a coat of varnish they'll be a bit tougher. It seems the way to use this stuff is to use the island method and stop before it peaks, so that you don't quite reach saturation. That way you can fill about 4 normal sized molds before it gets too thick. It's still far thicker than I'd prefer to work with and air bubbles are a nightmare, but at least it's strong enough to be used safely. Plus the setting time is insanely quick. Pour those 4 molds, rinse the mixing pot, get the water for the next mix and then scrape the molds quickly before they're too thick :) The casts can then be taken out of the mould 15 mins later.
I also picked up a new mixing pot from Ikea last night. I get the water in a measuring jug and add it to the plastic watering can, then do the whole island thing. Mixing is easier in this as it's quite deep so a vigorous swirl doesn't make the mix go everywhere, also the long spout means I can put the spout almost into the mold to minimise the height the plaster is poured from. Makes it a little easier to avoid bubbles, which with this mix is vital. The new pot was a whole £0.79 and works great, it's like the one in the pic but white :)

Three posts in one day, must be some kind of record!

Not sure I like the new plaster. It sets pretty quickly and I can't say what it's truly like until tomorrow when some of it will be properly dry but it's a bit of a pain to work with. It's lighter than the Stonecast and sets quicker, oh and it's cheaper, which are all positives. However on the other end of the spectrum it sets quicker which makes it awkward to avoid air bubbles and I suspect lighter = weaker. That said however, in 3/4 more casts I'll have all the walls done for the game :) Unfortunately I still have about 20 more casts to get all the floors done :(

I have also laid out the first third of the board to test how it looks and the layout. It's brilliant, which is something of a relief. Everything was fine on paper but until you actually have a working section in front of you, it's still an unknown. I have decided to change one thing though, the walls will no longer be atached to the tiles. This will make it easier to store and make the board more flexible as I'll also be able to make tiny corridors and huge rooms equally well for dungeon crawl type games. It does mean the tiles will no longer rotate but as the walls can just be picked up, that's not really a problem.
Posted by Dewbakuk at 07:03 No comments:

Well I've demoulded the casts. The simple casts are fine and came out of the molds with no problems, even though they feel a little "soft". I snapped a tile with some bubbles in it to get an idea of strength and it is weaker than my old Stonecast, however it's still much stronger than Plaster of Paris. Now the strength test isn't really fair as it won't really be set until tomorrow but it gives me an idea. I think it'll be strong enough for what I'm building. If I wanted thin, graceful walls for elf buildings or something I'd have concerns but for my chunky egyptian stuff I think it'll be fine. The more complex/fragile pieces such as the fountain accesory pieces didn't come out so well, I expect they'll need much more time in the mould to set. However, such pieces only matter for decoration and I don't need many at all. The floor tiles, wall pieces, basic blocks and pillar parts I need for the bulk of the build have come out fine and quickly, so the build is on!
Posted by Dewbakuk at 02:20 No comments:

Well, I ran out of plaster on Saturday evening. Sunday was spent at Warwick Castle and Monday was mostly spent tidying the house and searching for plaster suppliers in the area, of which I found one. Tuesday I had the health visitor over to do the 18-24 month check up on my daughter (who's 20 months and impressed the health visitor by being exceedingly cute) but thankfully my wife got out of work early so I was able to get her to pick up a 25kg bag of plaster for me. She's nice like that :P

So, the new plaster...... it's interesting and behaves VERY differently to my old stonecast. From the datasheets I found on the manufacturers website it's not going to be as strong at all, however it's also significantly cheaper so if it's strong enough then it's a huge win. More importantly it was the only plaster I could get quickly as the one company in the area that sold casting plaster only sold one type. So, as I said it's qualities are very different. I mixed the first batch using the "islands" method* and it had reached the setting up/scrape stage by the time I'd poured the first mold! I quickly pushed (yes, pushed) the rest into another mold and rinsed my pot. I then mixed a second batch that was far thinner, about the consistency of milk and poured a couple of moulds with that. The second batch was then scraped after 5 mins (probably should have been 7 but I was curious) and I demoulded the pieces in the second mold from the first batch. They weren't properly set but as I didn't expect it to have cast well anyway I didn't mind. I'd say 12 of the 15 pieces came out fine which was a surprise.

I've left the rest for a little while as I want to see how the batches compare coming out at the same time. Besides, Alexandra woke up and demanded daddy's attention. If this plaster works as I expect however and is strong enough then my time scale just got a whole lot better. I lost the three days I had spare due to "real life" however I think I'll be able to cast this stuff about every 45mins or so which means I can get it all finished in the next couple of days!

*Island method - essentially you take approx half the quantity of water you'd expect would fill the moulds and pour plaster in until the plaster starts to stick up out of the top of the water in little "islands". They have to be wet still and soak the water up, just not dissipate. If the plaster sticks up and doesn't soak the water then you need to add a little water. Then mix and pour. Really doesn't work with my new plaster!
Posted by Dewbakuk at 01:18 No comments:

I got the molds back and started casting them. It's a success, I can knock out lots of walls and floor tiles quickly! However those walls use up quite a bit of plaster and the mold needs about 3 of my usual plaster mixes to fill it up. I may have to rethink what I use to mix the plaster in, perhaps a measuring jug?

More importantly however, I've run out of plaster! I'm now going to have to scour the net for a local store/depot to pick some up from as I don't want to pay a fortune in postage and can't afford to wait for the slower shipping methods. :(

It's not all doom and gloom however, I'm using this break in my casting time to assemble what I've done so far. I have built a few floor tiles and I'm now waiting for them to set before adding walls. Of more interest visualy however is probably the first piece of "scatter" terrain which has now been assembled. It will go on the outside edge of one of the blank tiles placed along the edge of the play area and act as one of the "entry points". 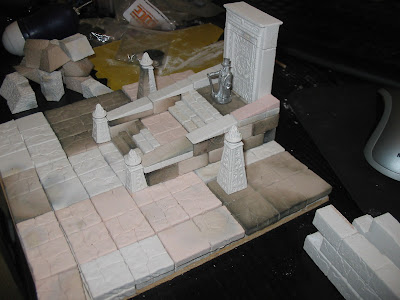 Posted by Dewbakuk at 13:32 No comments:

A word of advice, filling gaps with PVA is rubbish. I did the smallest piece that way and couldn't face the rest. It takes a long time, shrinks a little as it dries and dries clear which makes it difficult to spot problems.

So I used playdough. I bought a cheap tub for £0.97 from the local Wilkinson's and used a toothpick to push small lumps into the gaps in the walls making sure the dough was lower than the bricks. It was only slightly quicker than the PVA but there was no drying time where things could change. It's also blatantly obvious where you've been working and any excess dough can just be brushed off the wall.

Now obviously playdough isn't strong or resilient like dried glue and I wouldn't suggest painting over it. However that doesn't matter for this purpose. All the playdough has to do is prevent liquid rubber from flowing into the big gaps, something it is perfectly capable of doing. I dropped the walls along with a selection of floor tiles and pillar sections with a friend of mine who does resin casting so that he could create me some molds. I'd do it myself but I'm out of rubber and he has more space :) Thanks Curtis! I'll get to see them tonight when my wife picks them up for me on her way home from work and tomorrow I'll hopefully be able to start casting properly. The idea with the new molds is that I'll have enough pieces to make at least one floor tile with every cast. Which is good because I've pledged the labyrinth for a game down in London in 3 weeks time. Nothing like a deadline to get things moving! 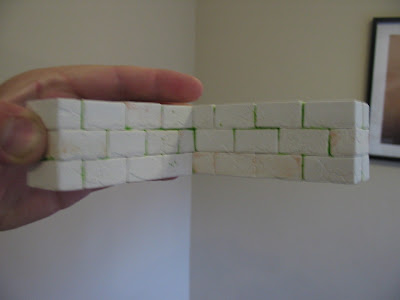 Posted by Dewbakuk at 05:09 No comments: